This article is part of a series:

This article series will focus on taking a simple command line script and incorporating it into Uptime Infrastructure Monitor. It will then demonstrate how to expand that script for use within a Custom with Retained Data service monitor that will enable you to not only register service outages in the event of a failure but also graph the historical performance trends. The final article in this series will guide you through the steps to further expand your custom service monitor so that it can be directly plugged in to the Uptime Infrastructure Monitor interface for use by your end users.

The built-in agent authentication protocol provides a quick and easy way for you to have the Uptime Infrastructure Monitor agent run commands (or any application) on your agent-side system without the fear of unknown users being able to execute the same commands. The output from the agent-side commands will be returned to the monitoring station custom script for parsing. This enables you to create a script that can monitor many different agent systems without duplicating the script many times. The following diagram illustrates the custom service monitor process:

Step 1 - Creating the Agent Side Script

When designing a custom service monitor, you should consider what information that you want the monitor to collect. For example:

Once you have written your agent-side script, you will need to configure your Uptime Infrastructure Monitor agent to execute it. As a minimum, you must configure the following settings for each agent-side command:

For the purpose of this example, lets assume that we have designed an agent side script that returns information about the temperature and humidity levels around a given agent system. If we were to run this agent side script from the command line it would be executed as follows:

These example commands are formatted for non-Windows systems. The command format is very similar on Windows systems, but require minor syntax and path changes.

To define your password and command pair on a non-Windows agent system, do the following:

Windows agents do not require a password file. However, you must enter the equivalent settings into the Agent Console with the following steps:

The following is a sample configuration. Note the additional folder named rexec_commands , which contains a key/value pair of the command key.

If any changes are made to the Windows agent registry please restart the "up.time agent" service to see these changes take effect.

The next step is to write the monitoring station script that will attempt to execute your agent side script, validate the output, and then return status or performance information to Uptime Infrastructure Monitor.

The monitoring station script can be written in any language and format, provided that it adheres to these general rules:

In most cases, the monitoring station script will contact an agent system and attempt to run a predefined agent-side script like the one that was defined in step 1 above. You can use any transport tool -- such as rexec, rsh, or ssh -- to contact the agent system.

However, IDERA recommends using the bundled agentcmd utility the netcat utility to contact your agent systems from your monitoring station script:

The 'rexec' text below does not indicate use of the 'rexec' system utility; it is simply a key word used to indicate to the agent that you are attempting to run a predefined command.

# now use the info above to contact our agent, store the output in a file for parsing

The syntax to use agentcmd is different than netcat. Review the following example.

When using agentcmd, the above netcat example would look like this:

Based on the settings used in the example monitoring station script, configure the monitor with the following setting:

The image below illustrates a sample monitor configuration. This service monitor will indicate a WARN or CRIT whenever the monitoring station custom script returns WARNING or CRITICAL in its output. 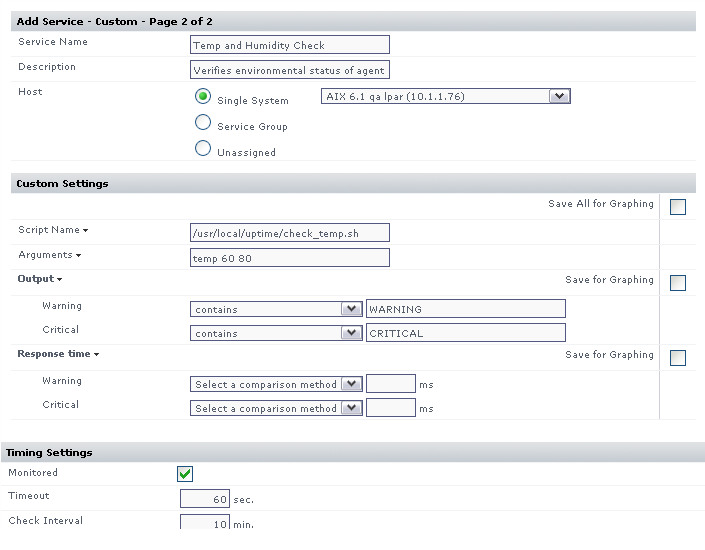